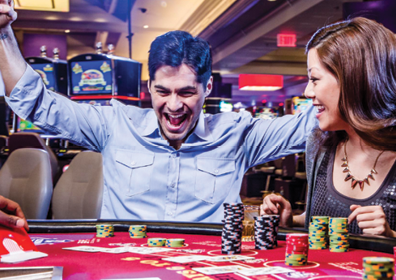 One of the latest developments in the poker table world is the introduction of automated poker tables. Instead of a dealer, these tables use computer monitors and touch screens to keep the game play moving. As a casino operator these tables can be favorable because the casinos no longer need to employ armies of dealers to run their tables. They can automate the process.

One company in particular, PokerTek, has been making large in roads into well established cruise ships and casinos. They recently hired poker expert David Sklansky as an outside consultant for additional expertise. They starting tag for their tables are $30,000. Despite the high price tag the company has had their share of ups and downs on Wall Street. Their last reported revenue was $6 million with net income a whopping negative 12 million. As the company is in a new space and a startup the early track record may not tell the full story.

Ultimately, the success of this idea will depend on whether or not people like playing at these tables. I conducted a rather unscientific ad hoc poll from people around the Internet who have played at the various tables and come back with mixed results. Overall it seems that people who play infrequently still like the idea of playing a “live game” with cards, chips and a dealer. However, most indicate that the automated table was better than no game at all.

The places that seemed to get the most traction with the automated poker tables were the local casinos. These are the places that people frequent on a regular basis and some of the players may supplement their income with their success at the establishment. The players like these tables because the number of deals per house is significantly faster than a human dealer with mistakes minimized. If someone is used to making $10 an hour from poker by doubling the number of hands then can now make $20.

There didn’t seem to be any mention of using the tables with large tournaments, but it may be a good use to have a large field quickly weeded out using automated tables and then the semi-final and final rounds reserved for live dealers.

The automated poker table seems to be making more and more progress everyday. However, it seems that it will have to co-exist with live dealers for a little while longer.